I’m so often asked how we achieve what we do with reputedly scatty thoroughbreds.

Unfortunately, thoroughbreds do get a bad press, very unjustified as a whole, I Remeber being told years ago by a rather pompous woman on a rather round cob that if I was going to use horses in my falconry I would need something like that as no thoroughbred would let you on board with a hawk.

I obviously bowed to her superior knowledge.

The journey from racer to falconry can be a long one but as a whole straight forward, as a rule, we can judge fairly well which horses are likely to be worth taking on to give it a go, the only one who deceived us was Nif ,

who waited till his feet were well under the table before telling us that he thought hawks were evil incarnate and should never be allowed in his presence again.

Normally wed start in the ground with a small hawk like a Harris, just introducing them and seeing how the response is , backing off if a problem , closer and flapping if the pony is happy,

A couple of days of this and we introduce Artemis, our eagle,

If they tolerate her it’s time to get on board

First time up we  always use a Harris hawk, normally Dave , these are fairly easy going and will just sit in the barn if they have to be released if a pony doesn’t like them

If this is accepted we’ll fly the hawk to me whilst on board ,again judging the response to see how it goes

​This goes on until a pony is happy to have a hawk flying over its head, this can take a week, or in the case of Henry five minutes
​​

After that it’s on to teaching 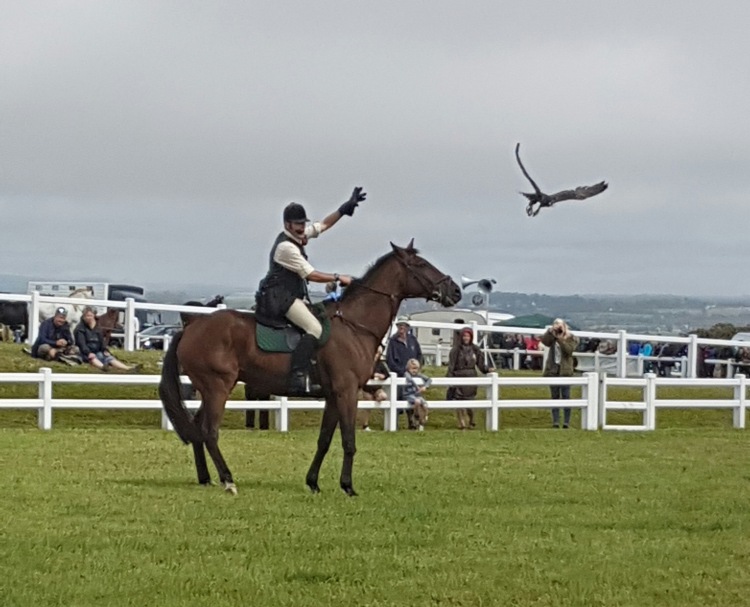 And most important of all, falconry proper